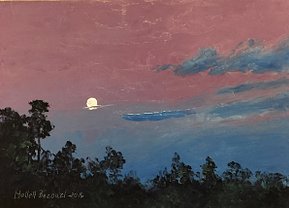 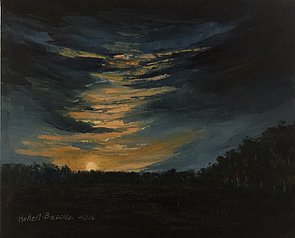 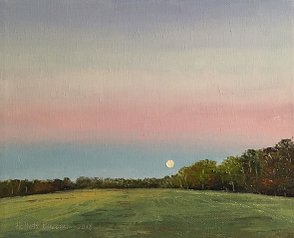 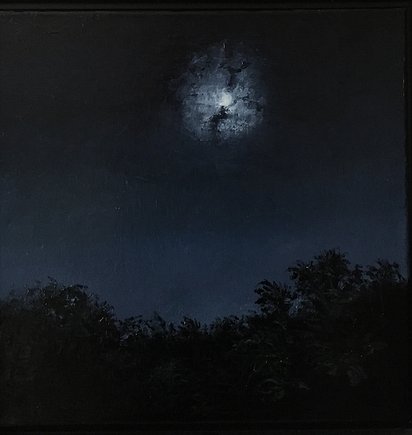 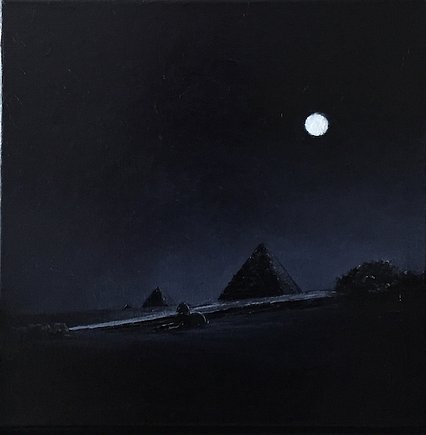 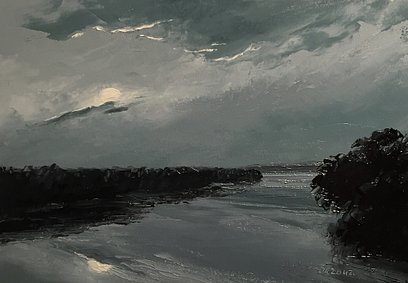 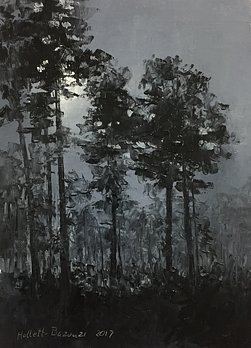 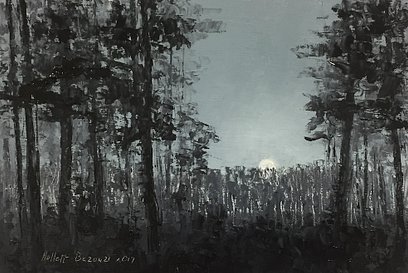 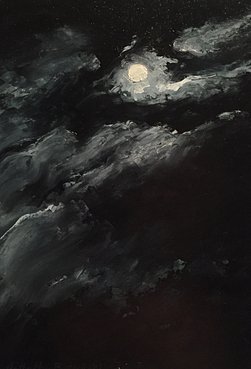 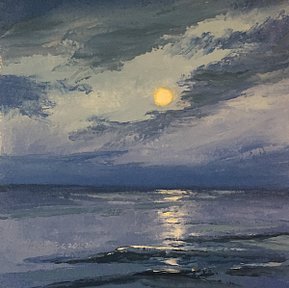 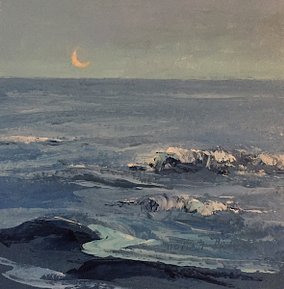 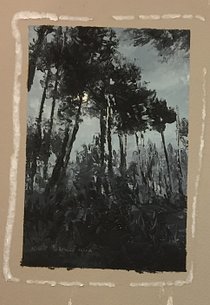 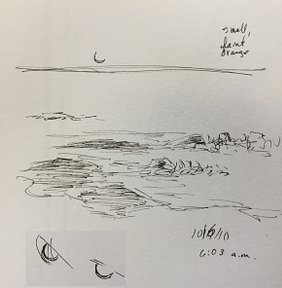 Below are the paintings I created using Titanium White, Mars Black, Chromatic Black, a bit of Manganese Violet (to make the Chromatic Black less green), and Cadmium Lemon Yellow. These are Gamblin Oils.

A Bit of Color...
The evening and night are full of color and light.

Moon over Egypt—I had a full moon my last two days there! Titanium White,  Cad Lemon Yellow, Cad Yellow Lt, Permanent Rose, Viridian Green, Indanthrene Blue, and Burnt Umber. I did use Ivory Black for the silhouettes of the pyramids and sphinx, the tops of the trees, and in some areas of the ground.

Often I just use Ultramarine Blue and Burnt Umber or Sienna for black/gray. This combination usually dries VERY quickly, even overnight. The colors I used on these two paintings stayed 'wet' a lot longer! They also kept a shine, which I don't find with the Ultramarine Blue and Burnt Umber/Sienna combination very much—because these paints do not have as much linseed oil, and that is why they harden (dry) faster, and the others dry slower!

For a while I have wanted to paint twilight/night images, especially with the moon. I decided that 2017 will have this as one of my main focuses. I will be posting my images here, and writing about this journey.

This really took firm form during the Super Moon excitement in November, 2016. I went out to Haw's Shop in Hanover, Virginia, a great place for viewing the rising moon unemcumbered. While I did not paint, I did take photos (which were awful) and did sketches over 3 nights. This resulted in some early paintings, just for fun (which I will not be sharing).

It was the 'Black and White' themed show at Stewart Gallery for February, 2017 that got me really working on the idea. That, and a painting I did in 2012 for Gamblin Paint's Torrit Grey contest (see below)

Moon Setting over the River, oil on paper, 6x9", matted under glass, framed to 12x15, SOLD

A while ago I went outside to see if I could determine the values in the nighttime sky. Of course, there are a lot of factors that could be involved—how late or early it is, how much cloud cover exists, the ambient light from local lights. But, for this night, it was a clear sky with just a few clouds, about 7 pm. Not much light, the sky was dark, quarter moon setting in the west. Actual moonset would be 9:34 pm, I think.

A value scale goes from 1 (white) to 9 or 10 (black). A value finder is a neutral grey, mid-value (battleship gray)

I tried again, and there was lots of cloud cover: the sky was lighter than 5, maybe 4, and the only dark areas were breaks in the clouds. Could not see the moon.

Color in Black...and no black in Black.

Two nights and three paintings. A super moon in November, 2016.