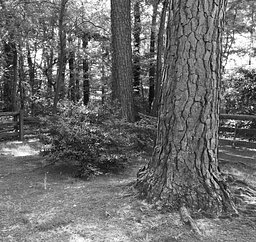 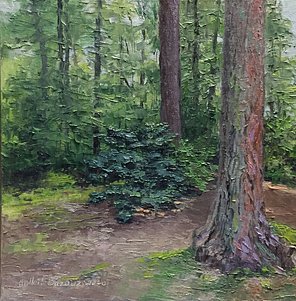 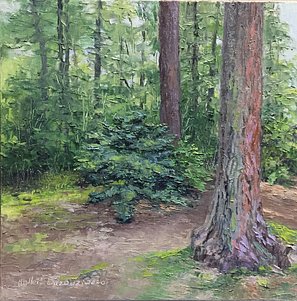 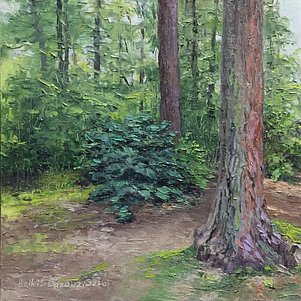 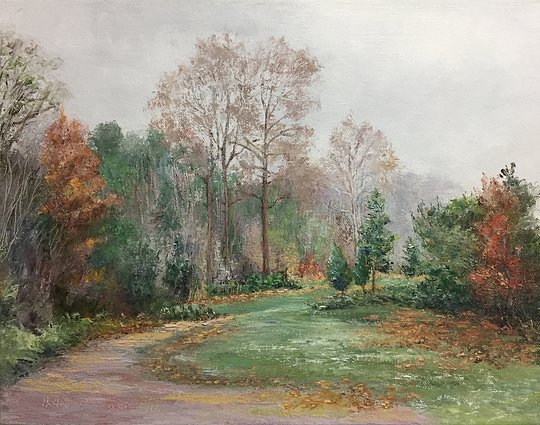 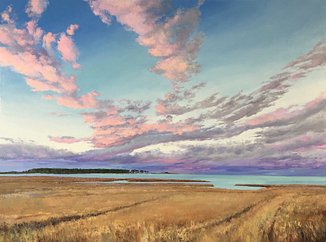 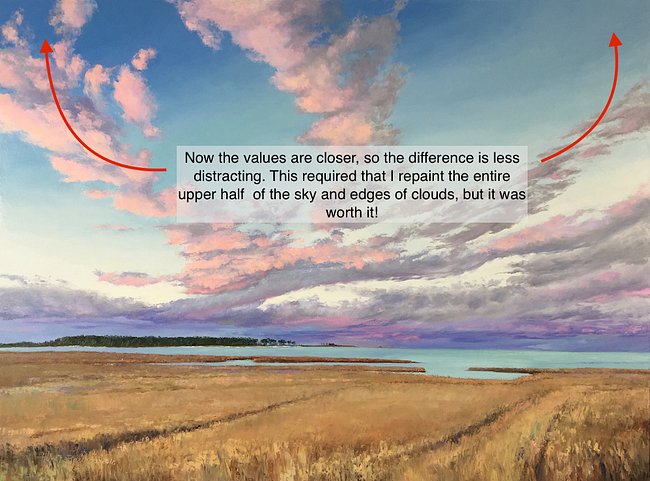 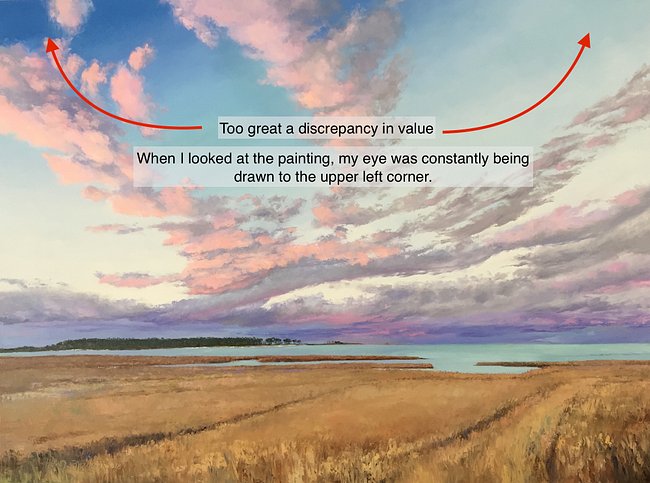 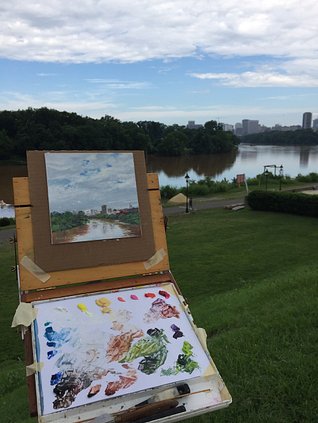 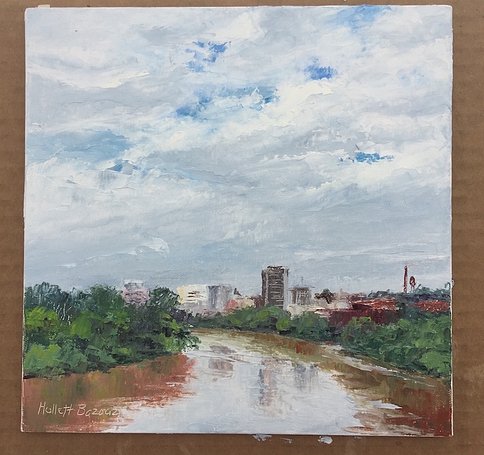 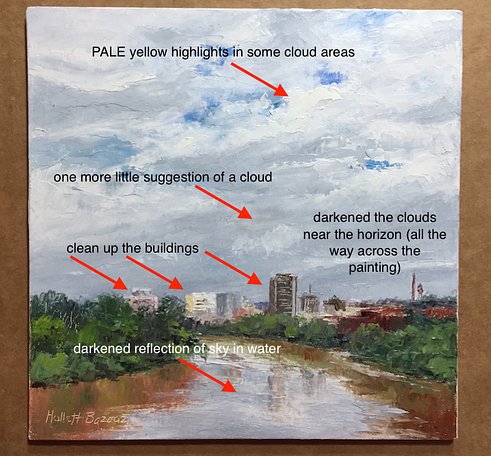 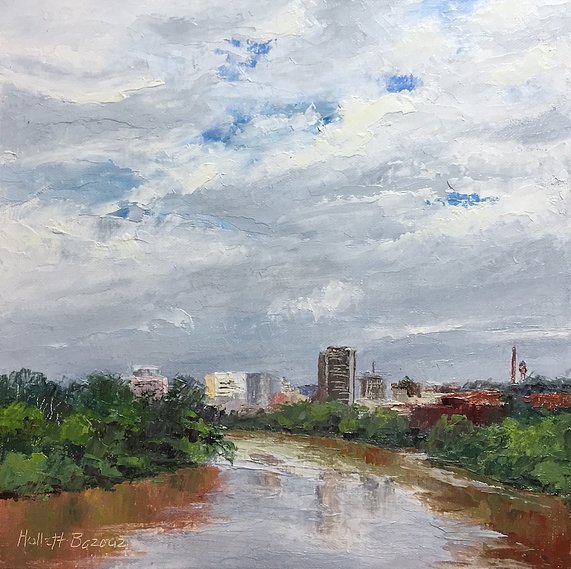 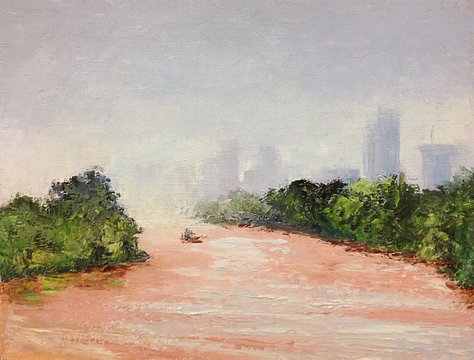 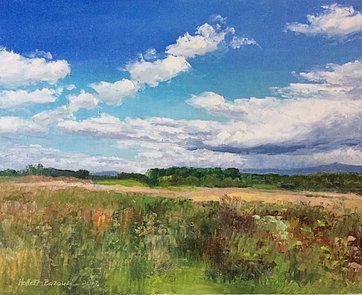 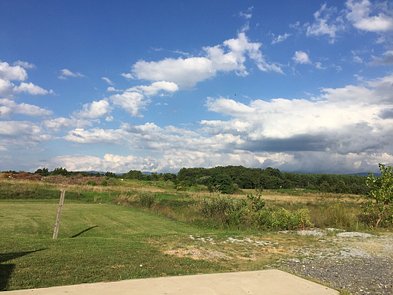 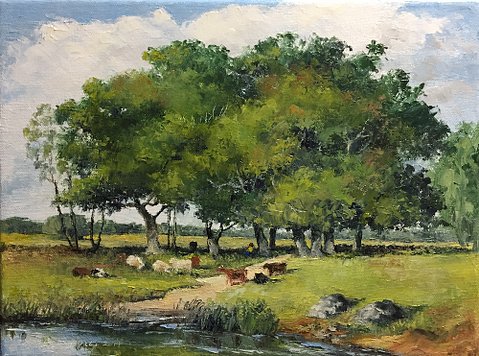 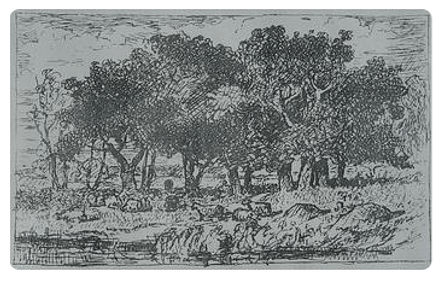 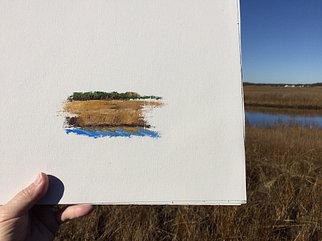 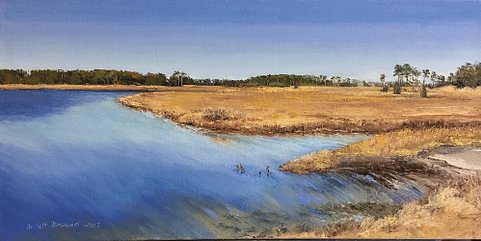 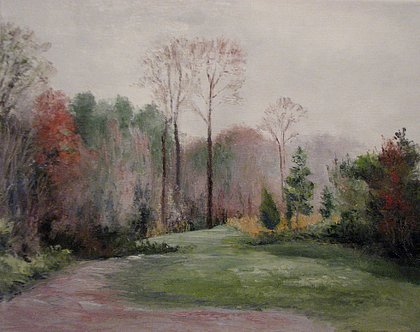 This would have worked just fine, but I didn't see it until I looked at my progress photos...

In the meantime, I had added more yellow to some of the outermost leaves...

Once I saw what I had done (lost the coolness of the light), I went back in and tried again.

A Corner of My World

Lightened up this tree.

I did this piece beginning as a video demo on Facebook for plein air painting May 2020. I talked about the process of painting outside, worked on it for about an hour outside, and finished it later in the house. I used a sketch and photographs I had taken to finish the painting. I had to keep in mind that the light was 'thin' (lots of cloud cover), then became complete cloud cover, so a lot of grey was in all the colors, and not as much yellow. The challenge was to create a sense of difference between all the different greens, not only to help make sense of the scene, but to avoid boredom. I used a photo converted to black and white to get a sense of the values, and then worked with slightly warmer and cooler greens by using a warm and cool yellow, a warm and cool green, and addinging in some purple, light violet, blues, peaches and greys.

The problem was, I didn't pay attention to what I was doing...It was only when I looked at my progress photos that I realized I should not have added yellow to highlight the leaf masses on the bush. At that point I pulled the painting out and repainted to remove the yellow. This also helped to separate it from the bush behind it.

Before—photo is an earlier reference, color is a little off

This was done as a demo at Rivers Edge Elementary School. When I got home I finished it, but I was never happy with it. It just felt too flat, too cut-out. I sat on it for a few years, and had decided to trash it, when I thought, "Let me try just touching up a few areas. WELL, there were more than a few areas, but the overall effect was much more pleasing to my eye. I made the trees less 'stick-like', added leaves on the ground, changed the path and made a hill where it could disappear.

I softened this edge at the trees

I added a lot more branches, even down the trunks.

Lightened up this corner.

sketch of Bannister's painting Under the Oaks

My painting, based on the sketch of Edward Bannister's painting. oil on canvas, 9x12"

I never had a problem with this painting; what I DID have a problem with was the foreground in the photograph. Part of the grass had been cut, and I certainly did not want to paint part of a mowed lawn and gravel! So, I used the information for wild grasses that were in other areas of the field, and made it look like I would want it to look like! I am reminded of a statement an artist once made, when a student commented on how beautiful his paintings were, and how lucky he was because he has such gorgeous vistas to paint (in this case, refering to the fact that he lived on a Mediterranean island). He turned to her and said, "You don't think it LOOKED like that, do you? I made it look that good!" That is not bragging; that is just what. we. do.

I orginally went to this site to just take photographs, because of time constraints. But the day was so beautiful, I decided to at least paint a few samples of color and texture. I always have paint and some kind of surface in my car. This day I had some scraps of primed canvas (I have no idea why). The back of my car (hatch lifted) became my easel.

I am so glad I did this, because when I got back to the studio the photographs were not like the paints. Even the photo I took on sight comparing my painting sample to the sight showed a difference--but when I looked at the same view with my EYES, the canvas and the view were identical.

After Edward Bannister's "Under the Oaks"

I have been fascinated by the idea that the only visual reference to Bannister’s first place painting at the Philadelphia Centennial Exhibition in 1876 was a sketch he did. I used this sketch, and some of his paintings, to create a facsimile of this large painting, which was described as being 4x5'. You can read more about his painting on my page "African American Artists" here.

This one, on the other hand, required NO tweaking! Painted between the swipes of the windshield wipers during a rainstorm, the city appeared and then disappeared in the rain, which made it a challenge to capture. But when it was done, it was done!

The greatest challenge was getting that muddy look to the water without having it LOOK like mud!

When I finished this painting and got it back home, there were a few areas that were problematic for me. While none of these might have bothered others, I could not ignore them. These changes were made after the paint was dry to the touch, about 3 days.

• The first thing I did was to lightly glaze over the area of the cloud cover near the horizon (behind the buildings) with a slightly darker grey paint, using a brush. The buildings were much more prominent when I was looking at them, and that was because the sky was darker against them. I couldn't make the white WHITER, but I could make the area around them DARKER. I used my oil paint mixed with Gamblin's Solvent-Free Gel. Beside making the buildings more prominent, this is a tiny bit more dramatic.

• I used the same glaze mixture to put darker areas in the water. The water was that light, but in the painting it did not read well. I put in enough dark areas to tie them togehter (but still have the water look lighter than the sky, which it did).

• To brighten up the sky, I added a TOUCH of lemon yellow to white, then put that over a few lit areas in the clouds. I didn't want the clouds to look yellow, just brighter. I also added the suggestion of a free-floating lower cloud with a knife.

• The buildings looked like they were from Alice in Wonderland. I used a bit of glaze and a knife to clean up the edges. Sometimes this takes a brush.

All of these adjustments took less than an hour, but I feel like they made all the difference in the world. Note that in the site photo, the sky is much bluer--by the time I had finished the painting, the clouds were clearing (hence the title).

New Point Comfort, That Time of the Day III

I worked on this painting over the course of a month, which is much different than my usual method. Normally, I finish a large painting in 2-3 marathon sessions. I think this fragmented approach caused the value issue in the sky. I worked on the left corner first, then later worked on the center, and almost a month later finished the right side. Never again!  FYI, the horizon with water and clouds was painted first, then the sky (over a month), and finally  the ground. Only after it was all finished could I see just how 'off' the sky was.

Contrary to popular belief, an artist does not always make 'perfect' creations the first time around. Sometimes they require minor adjustments to make them satisfactory to the artist. Sometimes, it becomes a major undertaking. Sometimes, there is no fixing...

They don't always end up perfect the first time...